What do we offer!

How can we manage log contents in near real time ?

This is the question ! How many times we have run troubleshooting or attack analysis on log data having to do with different files , different formats, different content ect.

First of all we need to collect log data in near real time. One possible solution is to use the combination of Storm and Kafka. Storm is a streming software while Kafka is a publish subscribe message broker. What we have implemented is a "producer" job that gets' log messages in input and produce a message in the Kafka queue according to a particular topic.

For this demo we have used following log data:

For Apache an Tomcat logs we have build two producers in java which accepts line in standard input and send it to the Kafka broker with a suitable topic.

For Oracle Database audit data we have implemented a java coverter which transforms the plain text audit file in a fixed format file. We have then imported the file in HDFS.

Working with Storm we talk about "topologies". Topologies are build by spout and bolts. Spouts are the components in charge of "streaming" the data in the form of "tuples". Bolts are the consumers of the tuples specialised in different purposes. Here below the example: 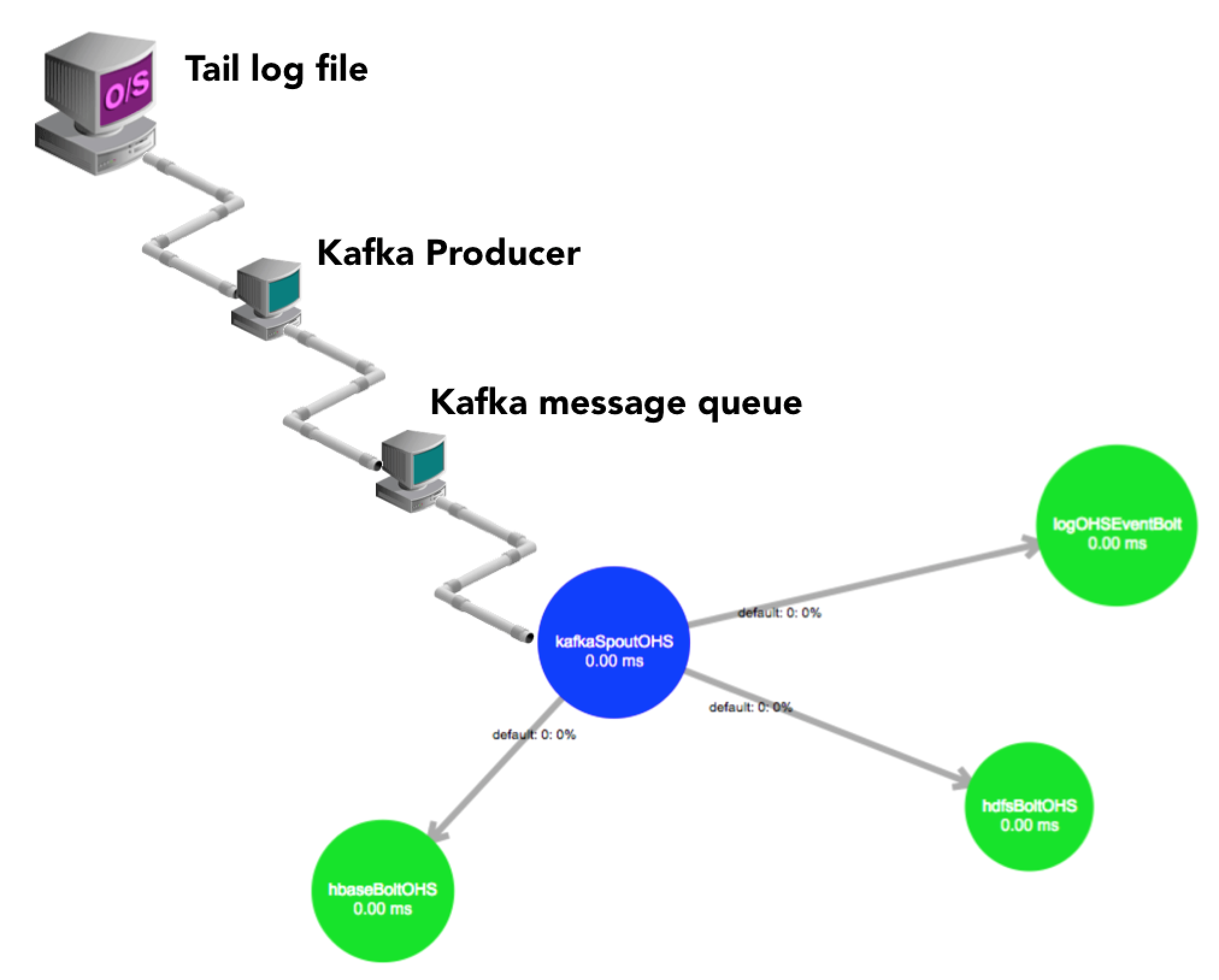 This is the topology for the Apache webserver log. kafkaSpoutOHS is the defined Spout in Storm getting messages from Kafka queue. The three Bolts used are specialised for the following:

logOHSEventBolt. This bolt writes a line in the storm topology log file for each tuple received from the Spout

hdfsBoltOHS. Writes the line received from the Spout in the HDFS file system. Temporary files are created in a staging area and then collapsed and moved to the warehous area of Hive in partitioned directories

hbaseBoltOHS. Writes the line received from the Spout in a HBase table.

A log tailer is on the Apache server. We have built a java class but can be a normal "tail -f" shell command. The java class might be better because it will open the new file when the log "tailed" in that moment is rolled.

The Kafka producer is another java class which is in charge of keeping every single line of the log and send it to Kafka message queue as a single message.

The KafkaSpoutOHS subscribed to the Kafka topic and get the log messages.

Data have been organised in HDFS, HBase and Hive as follows:

The hdfsBoltOHS writs files in a HDFS area (in our case we have left the default) suitable for Hive to create table based on that files.

and here below the regular expression used to parse each line

Tables have been defined in Hive and Hbase :

Similarly we have created other two tables to contain log data coming from Tomcat and Database Audit data. (logohs_events_text_partition, logdatabaseaudit)

Data will continue to flow into the tables as soon as the "tail" procedure captures new log messages and stream down to Kafka message broker , Storm and so on.

Meanwhile it is possible to run some queries to see potential security breach. For the scope of this simple demo we have created a new table log_monitor populated with the data of a single day coming from all logs. Here below the script:

Now if we select data from log_monitor ordering result by timestamp we can see important information. For example how many operation we have got on the single servers in the single hours:

We can see a lot of activity into the Database in hour 9. So we can drill down in the single hour and see the details of operations

And here the result: 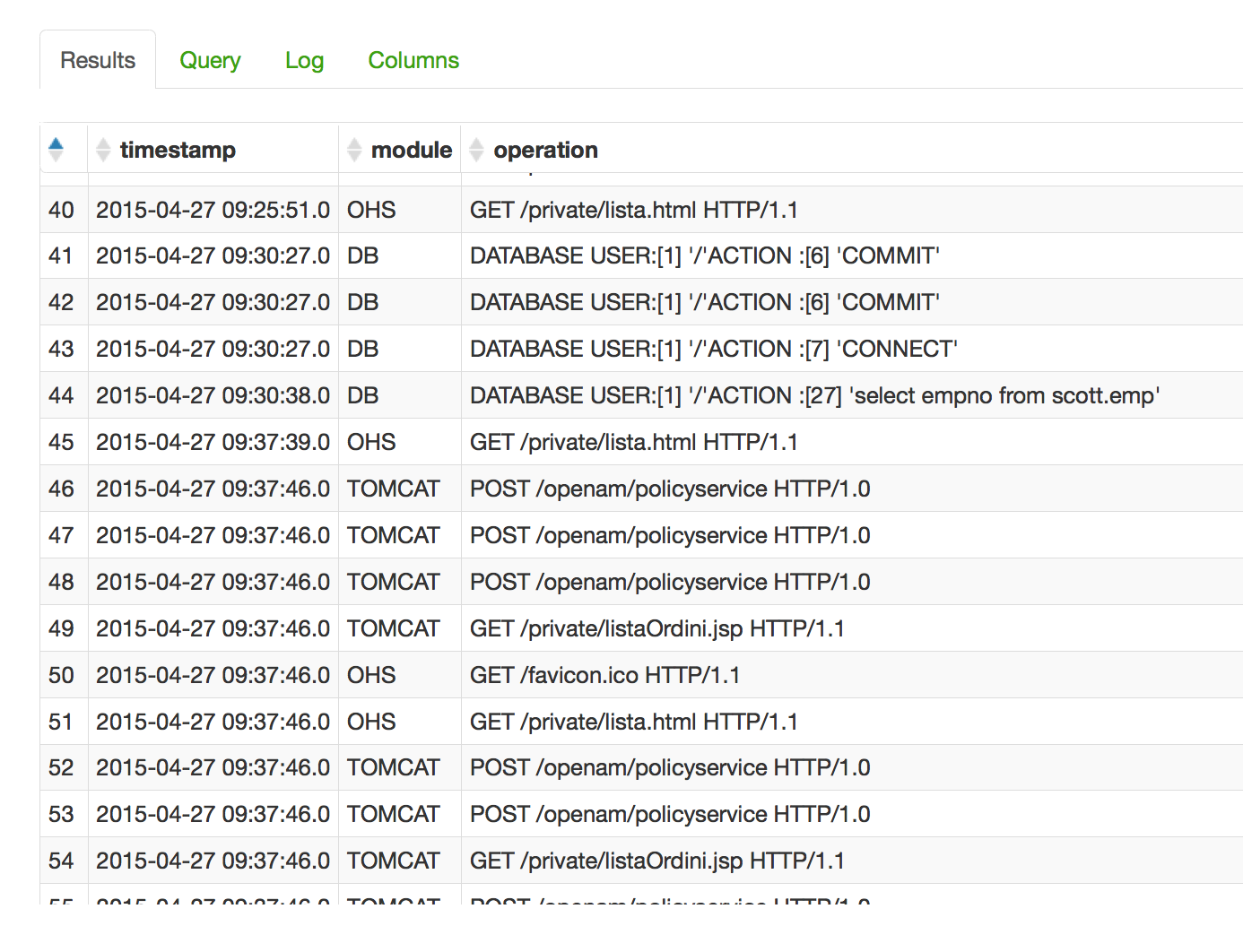 Here the analysis leads to the following: despite normal operations in OHS and TOMCAT addressing "lista.html" and "listaOrdini.jsp", there is a suspicious access to the table "EMP" addressed by the SYS user directly in the Database outside application control.